"Change is the only contstant in life.” 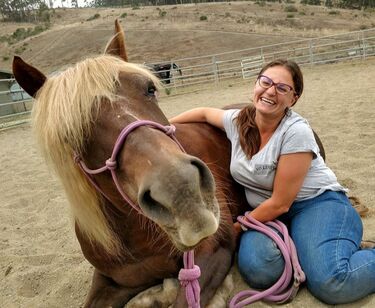 Dana has been crazy about horses since the day she was born, riding since before she could walk, and has been training horses and teaching people in a variety of equestrian disciplines for over twenty years. She spent her childhood years on the back of a foundation Morgan mare named Isis competing in Hunter/Jumper, Gymkhana, and other club shows. The bond the two shared has to this day, made the Morgan Horse Dana’s favorite breed. Dana has studied multiple horsemanship and training styles throughout the years, including many natural horsemanship methods like Parelli and Clinton Anderson, classical training methods, positive reinforcement training, and bridle horse or vaquero training. She ultimately became a Brandi Lyons Certified Trainer and Clinician and is now combining the best from each into a balanced training style that helps horses and humans build powerful relationships.

Dana attended Saint Mary's College of California and volunteered her free time during college to an Equine Facilitated Therapy Center where she assessed the incoming horses' existing training and filled in any gaps to ensure they were prepared for their new careers. Dana received her BA in Education from Saint Mary’s and went to Google, where she spent many years in the internal education department designing and delivering team development, leadership, coaching, and onboarding training. Dana is a gifted and natural teacher, who makes learning even the most difficult skills entertaining and rewarding.

Isis passed when Dana was a Senior in high school, so, after college, when the time came to get a new horse, Dana searched far and wide for just the right Morgan. She finally found Angel, a chestnut flaxen yearling. Already proficient at retraining horses, Angel was to be the first horse that she would start from the ground up and Dana sought out every opportunity she could for her and Angel to build a strong partnership. The strength of their partnership was obvious and Angel quickly became a champion halter horse and was pulling Dana around town in a cart as soon as Dana could afford to lease the equipment. Despite these early accomplishments, some boarders at the facility where Angel was kept bullied Dana, relentlessly, and always let her know just how inexperienced they thought she was. After a year of this constant bullying, Dana's confidence was destroyed and the bullies won; despite already walking Angel around in saddle, Dana was convinced that she needed professional help to start Angel. Dana found that help in the form of a colt-starting clinic hosted by a well known local professional. It was the perfect solution, Dana would still be the one to do the work, but she would get the professional support she had been convinced she needed. Unfortunately, while this professional was a wonderful human in public, they were not so in private, and the trainer beat Angel while Dana was in the saddle to the point that Angel had bloody welts that took months to heal. Naturally, Angel bolted at this attack and Dana fell off. This accident severely injured both horse and rider, left Angel traumatized, and almost cost Dana her hand.

Unable to get back in the saddle for the better part of a year, Dana used positive reinforcement methods to work through Angel’s trauma, teaching her to do a bunch of tricks and tackle obstacles, until they were both ready to continue their work under saddle. Still at the same boarding facility and still struggling with confidence issues in the face of the same bullies, Dana found comfort in the process of classical dressage training, which she and Angel studied for over a decade until a non-horse related foot injury left Dana unable to walk for months. That was when Jason stepped in to care for Angel and fell in love with horses.

Watching Jason excel in the saddle under her guidance restored Dana’s conviction in her abilities, and she went in search of a new mentor to help her realize her lifelong dream of doing what she truly loved for a living. That search led her to Brandi Lyons. Dana left her first clinic with Brandi so full of confidence that she bought a project horse for Jason. She spent a few weeks training the horse and was extremely proud of the progress they had made in such a short amount of time, but just one month after they brought the new horse home, tragedy struck again. There was an accident on the trail and while Jason was trying to assist, his new horse got put in a very bad spot and accidentally kicked Jason in the face while trying to escape. Jason was hospitalized for a few weeks and when he left he had half a face full of metal. The accident also left Dana with something she had never experienced around a horse before. Fear. Paralyzing, soul shaking fear. Dana used Brandi’s methods relentlessly for months to try and overcome her fear and salvage the relationship with the horse, but ultimately decided the traumatic memories were just too powerful, for everyone. They found the horse a great new home, and found Jason a new horse, Boo.

This new horse of Jason's was great, until he wasn't, and when he wasn't, Dana's confidence was shaken to the core and the fear came back stronger than it had ever been before. Her fear was so powerful that Dana wanted to get out of horses entirely. One night, while on the verge of selling Angel, Dana realized that this must have been how Angel felt after her traumatic accident and if Angel could find a way back to loving and trusting people, that maybe it was possible for Dana to do the same. With Jason’s support, they decided that if Dana could overcome this fear, if she could find her way back experiencing joy around horses again, that the couple would make it their mission to help others facing similar issues. Dana started utilizing the positive reinforcement methods she had employed to restore Angel's trust so many years ago paired with Brandi’s program and within weeks, Dana was confidently riding Boo and retraining his bad habits.

Committed to making their new found mission a reality, Jason plotted with Brandi to enroll Dana in Brandi’s certified trainer program. Dana spent months living and studying with Brandi at her home in Arizona and when she returned, the couple sold their house in the suburbs, moved to Gilroy and started De Frates Horsemanship where she is blessed to be living her mission every day.

In addition to training horses, teaching horsemanship, giving lessons, running clinics and breeding Morgans, Dana is also proud to combine her equine expertise with her educational background and corporate training experience. Dana is certified by Greg Kersten, the founder of Equine Assisted Psychotherapy, and owner of the O.K. Corral Series to offer Equine Assisted Learning Programs focused on Team Building and Leadership Development. 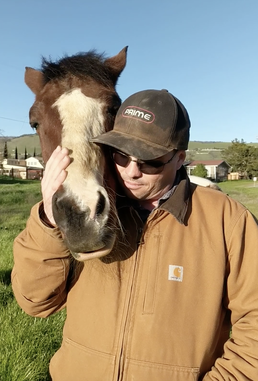 Jason has been a IBEW Union Electrician since graduating high school; his relentless work ethic and natural skill allowed him to quickly rise into management where he has managed multi-million dollar projects for several companies including Genentech, Google, box.com, and The San Francisco International Airport. He now sits in an office, managing a department that specializes in creating the digital plans that the field teams need to build and create masterpieces.
​
Jason spent his youth constantly searching for his next adrenaline rush and found them through rock climbing, mountain biking, kickboxing, and stunting motorcycles. Unfortunately, these pursuits left Jason with multiple injuries including several damaged disks in his neck and lower back. When Jason discovered horses he found a new outlet for excitement that also brought him the fulfillment all his other endeavors always seemed to be missing.

Jason came to horses much later in life, the few experiences that he had previously left him thinking that horses were nothing more than 1000 lbs brainless creatures that were afraid of their own shadows. That all changed when Jason met Dana, and more importantly, met Angel. Angel opened Jason's eyes to just how amazing horses truly were, and how building a relationship with a horse could change your life. It was all over for him; he was hooked. Jason saw just how much joy, fulfillment, and of course, challenges, working with horses could bring to your life and after training with Dana and Angel for a few years, it was time for him to get a horse of his own.

​Jason and his first horse suffered a major accident only a month into their relationship that hospitalized Jason and left him with half a face full of metal, but despite that trauma, Jason’s love for horses has only continued to grow over the years and as has his horse collection. Jason and his old trusty steed, Boo, enjoy hitting the trails with Dana, while Duke has become his go to obstacle horse. Last but certainly not least, Jason continues to feed that adrenaline addition with Izzy by competing in cutting.

We would be lost without our equine partners. Meet the horses that taught us most of everything we know.
​We call this the Alphabet Soup Gang, and more importantly, our family.